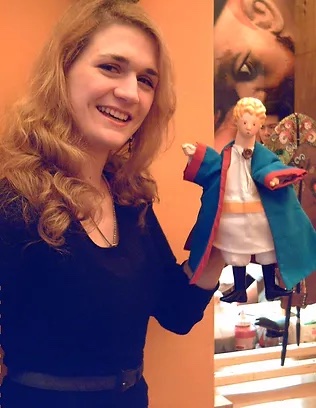 Lucie studied the violin as a child at the conservatoire of Nancy, and passed her final exam the same year she got her Baccalaureate. She first pursued studies of  History of Art and Archaeology at the University March Bloch in Strasbourg, before reorienting her attention towards a more “hands on” approach of art. In 2000, Lucie was selected to study theater design at the renowned Saint Martin’s College. After graduating in 2003, she remained in London to work as a costume designer. During this time, she discovered puppetry at the Little Angel Theater.

In 2006 Lucie had the opportunity to  learn traditional Taiwanese puppetry in Taiwan with the master Chen Xi-Huang.  During her 6 years there, she discovered the culture of this ancient art form and learnt the secrets of manipulating, but also carving, embroidering and painting the beautiful puppets, under the watchful eye of her master Chen Xi-Huang. She performed in Taiwan with  tours in Japan, France, Canada and Turkey. With an additional  internship in China, she learnt shadow puppetry with the great master Wei in Xi-An, and while in Taipei, she  also discovered the unique shadow technique created by the American puppeteer Larry Reed.

After meeting her husband in 2011, she moved to Texas. In Austin, she worked as a first hand in the costume shop of the Mary Moody Northern Theater, and also performed with the two  puppet companies „Glass Half Full“ and „Trouble Puppet“. Lucie now works in Nancy as a costume designer at the Ballet of Lorraine and the Nancy opera house, as well  as a puppeteer for various puppet companies and  her own company, “Compagnie HOLD UP!”, which she created in 2016. “Compagnie HOLD UP!” promotes both traditional Taiwanese puppetry and contemporary pieces mixing costumes, puppets and music, such as in her production Theatrum Mundi. She is currently working on a piece after Ravel’s opera “L’Enfant et les Sortilèges”.