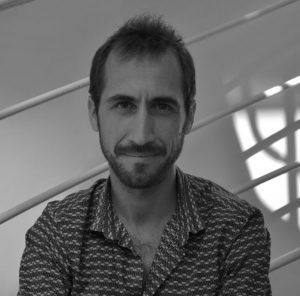 Born in 1981, Denis Fargeton is both a composer and juggler. He was first schooled in the circus with an emphasis in juggling at the National School of Chambéry, and Cirque Plume’s School, additionally studying and working with jugglers Jérôme Thomas and Julien Clément. He is the co-author of two juggling pieces which have had more than 200 performances around the world.

An amateur musician and pianist since he was eight years old, he was particularly interested in jazz,and at age 18, decided to study composition and electro-accoustic composition at the conservatories of Toulouse and Lyon.At the Conservatoire National Supériore Musique et Danse de Lyon (CNSMDL), in collaboration with Fabrice Pierre, he tested and realized scores for numerous groups. Soon after, composer Robert Pascal was to be become an important influence on him. He continued with further studies in composition at the CNSMDL in 2010 and IRCAM in 2016. His compositional teachers include Michele Tadini and Philippe Hurel.

He has won the Pierre Jean Jouve’s competition and he has had additional masterclasses with composers such as Franck Bedrossian, Luca Francesconi, Martin Matalon, Mickaël Jarrel, Philippe Hersant, Heinz Holliger and Yan Maresz.

In May of 2014 he was invited to Bologna to conduct one of his own pieces as well as to participate at the „opus XXI“ summer academy in Germany. He has worked with numerous ensembles such as Les Percussions clavier de Lyon, KNM(Berlin), and L’instant Donné (Paris).