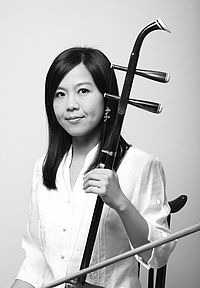 Erhu virtuoso Wang Ying-Chieh was born in Taipei, Taiwan. Her music studies began in the Western classical tradition, with piano, violin, and composition, then she moved to traditional Chinese music and erhu. She graduated with a major in Chinese music from the Chinese Culture University in Taipei, where she also obtained a master’s degree in erhu performance. She served as the concertmaster of the Taipei Chinese Orchestra. In 2012 she began her solo career, collaborating with artists from various fields and establishing erhu as a solo instrument in diverse and non-traditional contexts. She has frequently been invited as a guest soloist and has performed with ensembles such as Regensburg Philharmonic Orchestra in Germany, Ensemble KNM in Berlin, Hong Kong Sinfonietta, Shanghai Chinese Orchestra, Chinese Traditional Orchestra of Jiangsu Performing Arts Group, National Chinese Orchestra Taiwan, Taipei Chinese Orchestra, and the Kaohsiung Chinese Orchestra. She has also collaborated with the improvisation group MAFIA Ensemble, and was the feature artist of the French contemporary music association TPMC’s Erhu Contemporary Repertory project. Wang was chosen by the Taiwan Music Institute for its innovative Mentor and Partnership program. She was awarded a residency at the Cité Internationale des Arts in Paris by the Ministry of Culture in Taiwan. Currently, she is a member of the Pan Project Ensemble, an ensemble featuring traditional instruments from Chinese, Korea, and Japanese cultures. Additionally, she serves as the artistic director of the ensemble Yunshuyachi in Taiwan.