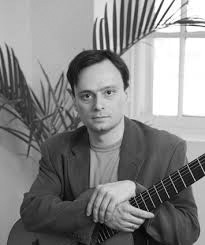 Rusty Banks is a composer/guitarist born in Jasper, Alabama and living in Lancaster, Pennsylvania. His compositions have been performed in China, Taiwan, France, Italy, Belgium, Canada, Mexico, and throughout the United States. Besides writing concert music for ballet, orchestra, wind ensemble, and other acoustic ensembles, Rusty designs pieces that use traditional performers, user-end electronics, and video within dynamic audio/video installations.

In 2011, Rusty was listed as one of the 100 composers under 40 whose music is “shaping our contemporary musical scene and defining what it means to be a composer in the 21st century.”

Rusty’s work, “Babbling Tower-to-Tower” was chosen as the winner of the 2011 UnCaged Toy Piano Composition Competition.

Rusty’s chamber orchestra work, “Ashfall” was commissioned by The Nebraska Chamber Players in 2012 and was the subject of Nebraska Educational Television’s documentary “Ashfall Unearthed” in 2013.

As a guitarist, Rusty is an often called upon interpreter of new works for the concert guitar. In addition to modern works, Rusty has performed much of the traditional solo repertoire as well as concerti with Lincoln Symphony, the Third Chair Chamber Players, Doane Orchestra, and others.

Besides composing and performing, Rusty teaches guitar and other music courses at Franklin and Marshall College and Millersville University.